By: multiple sources combined by authors 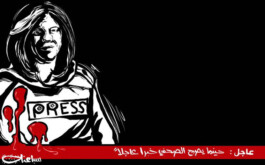 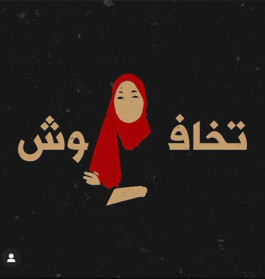 Image 2: Wall stencil and social media icon on albawaba, 2021, unknown author, showing Muna elKurd, activist and mobilisers from Sheikh Jarrah, Jerusalem with the word “do not be afraid.”

This detour’s title draws from Bayan alKarama wa alAmal — the Declaration of Dignity and Hope, which marks a day of general strike across historic Palestine exactly a year ago. The civic disobedience on 18 May 2021 came after weeks of Ishtibak (Arabic for confrontation and engagement throughout the territory, see entry 1.1 Commun(icat)ing Solidarity), and it disrupted not only the systems and economy but also the political cards. This detour has been temporarily replaced. Instead of the illustration (will be re-uploaded), we are taking a stance in support of feminist Palestinian power.

We were set to announce the mapping change logbook on 12 May 2022. However, a day earlier, Shireen Abu Akleh — veteran frontline reporter and inspiration to generations of Arabic speakers throughout the globe — was murdered by the Israeli Army while on duty in Jenin. A record-breaking three-day funeral of spontaneous processions and farewells with flowers from Jenin to Nablus, then to Ramallah and Jerusalem, overwhelmed the moment. Shireen was a sharp and daring reporter. She was committed to the streets and to the stories of everyday people. She was a trainer and a student, and was and will remain an icon of the press for Arabic speakers. Several initiatives to commemorate her legacy have been announced, including scholarships and prizes for students of media and journalism (e.g., Birzeit University, the American University of Beirut).

On Friday 13 May 2022, Shireen’s remains were laid to rest on Mount Zion after prayers in the old city under tightened Israeli measures that included lockdowns, roadblocks and other tactics to hinder mourners from participating. Still, tens of thousands escorted the burial, and although there was a ban on the Palestinian flag and particularly the draping of the coffin with it, it kept reappearing in spite of inspections, confiscations, and arrests. For the first time in contemporary history, churches of Jerusalem from all denominations united in ringing their bells for an extended period to escort the burial.

Friday 13 May 2022 was a day of collective mourning to honor the life of the self-made legend that Shireen is, and it became tantamount to a unifying ceremony of civic disobedience that re-claimed Jerusalem for a day. The unprovoked violent attacks by Israeli armed officers against coffin carriers and others drew international high-level condemnation. However, judging from the global record on murders of journalists or human rights defenders, it is highly unlikely that there will be any consequences for the perpetuators. As we note in the closing entry 3.3 Counterimaginaries of Dissensus, upholding human rights and protecting defenders and responders is a major obstacle to moving forward on sustainability agendas and ending oppression in many places around the globe.

“I chose journalism to be close to the people. It might not be easy to change the reality but at least I could bring their voice to the world. I am Shireen Abu Akleh.”