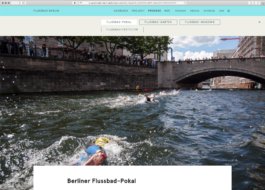 The journey of Flussbad Berlin (since 1998), a project that strives to reclaim an unused canal along the Museum Insel (Museum Island) in Berlin for non-commercial community use, has been giving us great materials for showcasing a contemporary fantasy that stuck around and grew through pseudo-concrete imageries/inaries. Mobilizing both people and science, Flussbad Berlin has contributed to significant political shifts in terms of how Berlin’s spaces are and can be used to serve the concept of Gemeinwohl.* Using hard science and great communication strategies, they combine classical representation and imagery tools with experiential components, such as giving a taste of “what could be” through the yearly Flussbad-Pokal (swimming tournament since 2015; keyword: ‘premature gratification’ by Katherine Shonfield). For many Berliner, one of the main things that resonates is how their ‘ace imaginary image’ of a wide staircase replacing the wall along the central Lustgarten (between the Berliner Dome and the Altes Museum) had to be pulled out of the advocacy toolkit. This visualization became politically non-kosher as it implied the removal of a small fountain by Karl Friedrich Schinkel, which happens to be a monument under heritage protection.

* Gemeinwohl is a specific German term that is difficult to translate. It means a combination of ‘public interest’, ‘greater good’, ‘common good’, ‘public welfare’.