Cartography of a Techno-political Assassination 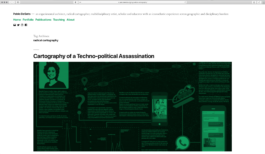 This project brings a visual exploration of the physical and digital layers surrounding the death of Marielle Franco. If it was not enough to kill her on the streets, the murder was followed by the attack on her public figure through the circulation of fake news and images in the digital realm. Using cartography, the project visually presents in the same condensed page the multiple layers and elements involved in the event: human bodies, surveillance cameras, WhatsApp groups, photographs, lethal weapons, urban routes, mobile phone screens, cloned car license plates, and twitter accounts. The information was collected from the online portals of the newspapers Folha de S. Paulo, O Globo, G1, BBC Brazil, Brasil de Fato, El País, and research institutions: FGV and Monitor Público / USP. While visualizing these heterogeneous elements altogether, we started to grasp a complex story of two instruments of assassination, its physical violence and the digital infrastructures and procedures that made it possible.