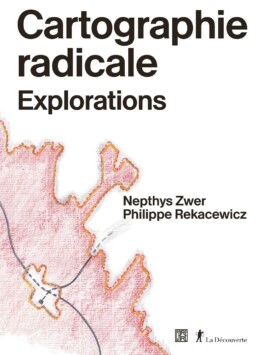 There are maps that say no. Radical maps that reveal and protest. To understand these rebellious maps, how they operate, their strengths and their power, this book takes us on a discovery journey into the heart of the cartographic world. What happens when we create a map, be it radical/critical, experimental or conventional? What are the intentions behind its creation and implementation?

Maps help us to find our way, and with maps we may make war or peace. They function as a dreamachine that also forms our reality. What motivates this very special act to symbolically shape the world, from Strabon to the anarchist Elisée Reclus, from the Benedictine Hildegard von Bingen to the explorer Alexander von Humboldt, from portolans to staff maps?

Around 1900, the sociologist W. E. B. du Bois and his team invented new graphic ways to present statistical data about the status of black people in the United States. Some sixty years later, it was this same cultural and economic racism that William Bunge and Gwendolyn Warren's small Detroit Geography Institute addressed, thus drawing the contours of an engaged geography.

From there, an awareness took place regarding the power of maps. Radical cartography spatializes social and political data allowing to create maps that highlight and denounce unequal living conditions and rights, compromises and dispossessions. It points to political-economic trade-offs, land grab, the destruction of habitats by agribusiness, pollution, and anything that in one way or another weighs on humanity's happiness and future. The maps that traditionally serve powers and authorities become tools of protest and instruments of political and social emancipation when civil society appropriates them. Politics, art and science then enter into dialogue to create an unconventional and free image of the world.