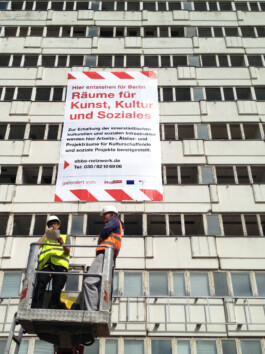 For 10 years, the Haus der Statistik stood empty in the middle of Berlin. In 2015, the initiative Haus der Statistik, a group of committed artists, architects, cultural workers and politicians, prevented the sale of the building to investors and the planned demolition. The impulse of the initiative Haus der Statistik was taken up by the Berlin-Mitte district council and later in the coalition agreement of the red-red-green government of Berlin. In order to realize the public welfare-oriented model project, the building was acquired by the state of Berlin from the Bundesanstalt für Immobilienaufgaben (BImA) at the end of 2017. This cleared the way for a community-oriented development on the site. In the existing building and through approximately 65,000m² of new construction, space will be created for art, culture, social services and education, affordable housing, as well as a new city hall for Mitte and administrative uses. To achieve this goal, an innovative and effective constellation of actors was concluded. The five cooperation partners ("Koop5") - Senate Department for Urban Development and Housing, the District Office of Berlin-Mitte, the state-owned companies WBM Wohnungsbaugesellschaft Berlin-Mitte and BIM Berliner Immobilienmanagement, as well as ZUsammenKUNFT Berlin eG - have been working cooperatively and in joint responsibility on the public welfare-oriented development of the Haus der Statistik since January 2018.