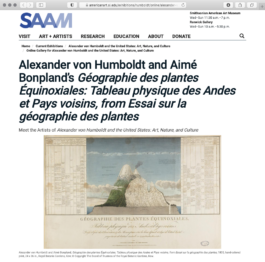 In 1805 Humboldt and Bonpland published this plant geography map, which Humboldt called his Naturgemälde or “picture of nature.”* It combines illusionistic watercolor with a cutaway diagram labeled with the plants he and Bonpland observed in South America, shown at the altitudes where they found them. This map affirmed his belief that the distribution of plants around the globe could be correlated based on altitude and the rock underneath. By amassing and comparing this kind of data, Humboldt refined his theory that everything on the planet was interrelated. His idea of the unity of nature —that plants, animals, and climate are related in ecosystems—is widely accepted today, but was a radical concept when Humboldt first began writing about it.