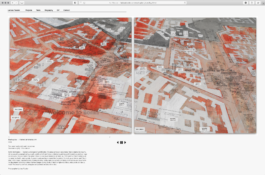 Forms of Brutality links to issues of poverty, gentrification, and the disparity of wealth. I was thinking about the brutality of poverty, especially when it sits beside wealth and luxury. In the context of Berlin, it can get even more complicated and entangled, for example, when new building sites sit on top of former Wall sites. I find it important to recognize Berlin as a site of trauma and pain – there are generations and generations of Berliners that have experienced trauma. In particular, I was thinking of the idea of transgenerational trauma. In Canada, the term is often used to speak about the genocide of its Indigenous Peoples and the resulting trauma that has been transferred to subsequent generations. The concept is often used in a Jewish context as well. In Berlin, I think one can also think of transgenerational trauma within a perpetrator context. Not even just Second World War victims and perpetrators, but then into the period of the Wall, Stasi, and East Germany and through the Cold War. Each of these eras adds layers of new trauma.

The Wall caused immense physical holes in the landscape, creating barren swaths of land – new economy luxury homes, that weren't even designed to be homes but instead were designed to add to market value, are being built on top of that trauma. So, for me, "forms of brutality" is an idea that deals with the current state of the city today – the exacerbated poverty, but also the active building, these new homes on top of trauma that is in the landscape physically.

* excerpt from an Interview with Larissa Fassler by Alicia Reuter for SMAC, full interview can be found here: http://smac-berlin.de/interview-larissa-fassler