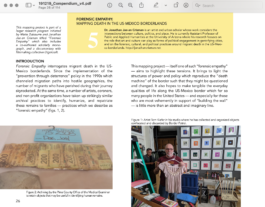 *Extract from longer text by author, which was sent to K LAB in preparation before attending Workshop 2; see detour 306

Forensic Empathy interrogates migrant death in the US-Mexico borderlands. Since the implementation of the “prevention through deterrence” policy in the 1990s which channeled migration paths into hostile geographies, the number of migrants who have perished during their journey skyrocketed. At the same time, a number of artists, coroners, and non-profit organizations have taken up strikingly similar archival practices to identify, humanize, and repatriate these remains to families — practices which we describe as “forensic empathy”.

This mapping project — itself one of such “forensic empathy” — aims to highlight these tensions. It brings to light the structures of power and policy which reproduce the “death machine” of the border such that they might be questioned and changed. It also hopes to make tangible the everyday qualities of life along the US-Mexico border which for so many people in the United States — and especially for those who are most vehemently in support of “building the wall” — is little more than an abstract and imaginary line.

Note: This mapping project is part of a larger research program initiated by Maite Zubiaurre and Jonathan Jae-an Crisman titled “Forensic Empathy” which also includes a co-authored scholarly monograph, and a documentary with filmmaking collective Dignicraft.