A Pervasive Game in Manchester 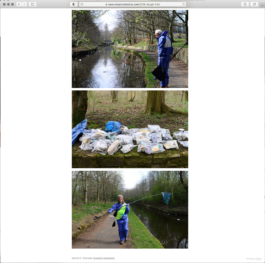 In October 2014 TRES spent 3 weeks immersed in and on the Northwest waterways developing ideas for a new participatory artwork for the canals. Investigating the spaces in and around the canals, examining the detritus/litter found there as an archaeological subject and considering how it can be used to engage the public in discussion and debate about environmental and social issues. This new commission Rough Fish in 2015 took the form of a game, where participants got involved in exploring, recollecting and classifying the XXI century fauna/litter of the Northwest Canals in a collective interactive mapping experience.

Rough Fish is a two dimensional social cartography: the physical experience, on the ground (getting your hands dirty), playing the game; and the virtual, collective mise-en-scène, where we can map and visualize the relations, as well as contribute and interact between each other. The first, the experienced level -on the ground- implied becoming an active player -or fisher-, a participant in the game, that is, co-creator of the piece. The second is an observer / tracker of the processes of the piece that was done through walks along the canal (locating trash) or through the web app of the project.