detour 206_via The Village Files 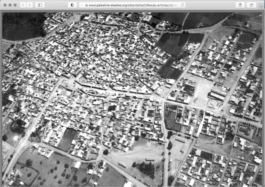 In the years between 1943 and 1948, squads of young scouts from the haganah, the pre- state armed organization and forerunner of the israel defense Forces, were employed to gather intelligence about Palestinian villages and urban neighborhoods in preparation for a future conflict and occupation, and as part of a more general project of creating files on target sites.

The information was usually collected under the guise of nature lessons aimed at getting to know the country, or of hikes that were common in that period. The scouts systematically built up a database of geographical, topographical and planning information about the villages and population centers. This included detailed descriptions of roads, neighborhoods, houses, public buildings, objects, wells, caves, wadis, and so forth.

Overall, this intelligence effort was known as the “Village Files” project, reflecting the fact that most of the sites about which information was collected were the numerous Palestinian villages existing in Palestine before 1948, and that documenting those villages was a central mission. The scouts’ work included perspective sketches, maps, drawings and photographs of each village and its surroundings. The maps used by the scouts were collected in a secret base on Mapu Street in tel aviv, located in a cellar that was given the cover name of “the engineering office” and code-named “the roof.”

Detailed information about the villages was meticulously catalogued and organized in files by the planning bureau of the haganah general staff, then held in the organization’s territorial command centers around the country. Over time, in order to broaden the existing information in the files, haganah commanders decided to photograph the villages from the air. Sophisticated ruses were used to deceive the British authorities, who prohibited such activity. The villages were therefore photographed under the guise of the activities of a flying club or romantic aerial excursions, with a camera and film hidden in various parts of the plane developing unique means of military spying. Women played a significant role in this process, and one of them became, as far as is known, the first female aerial photographer of the Jewish community of Palestine. [...]