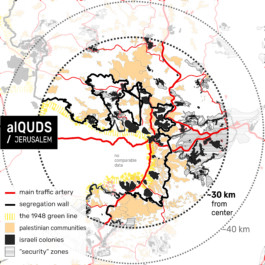 new material by K LAB, based on B'Tselem Data

Gerrymandering is a practice that is commonly associated with the United States of America, however, it is applied in many places. It is a practice by which boundaries of administrative areas or districts are manipulated and redrawn to influence voting outcomes, to give advantage for a certain party or socio-economic class over others. It often coincides with the intention of establishment politicians to contain and dispossess undesired bodies of political power as well as limit the latter’s access to and control of resources and wealth. Through corrupting voting outcomes gerrymandering impacts design and provision of infrastructures and services, further disadvantaging disadvantaged communities.

Jerusalem’s borders have been redrawn a couple of times since 1948, systematically dissecting socio-economic relations and space while re-engineering and militarizing the landscape. The redrawing of boundaries serves different goals, the main of which has been to lock Palestinian communities out and include Israeli colonies within the snaking official borders of the expanding city. In the early years of the 2000s, Israel doubled down on its strategy by constructing the Segregation Wall, which in Jerusalem often composes of nine meters high concrete elements with watchtowers, trenches, and passage points. While Israelis can move around freely and their neighbourhoods are well connected to traffic arteries, Palestinian access is capped by having little to no direct access to connecting roads, as well as by the segregation wall and around a hundred checkpoints and gates that exist in the area of the map above (not marked, can be viewed on the B’Tselem interactive map). To pass through checkpoints and passage points there are a hundred types of hard-to-obtain permits that devise the movement of Palestinians, keeping them bound to their bantustans on the eastern side of the no more existing green line (what political negotiators refer to as the 1967 borders, considered ‘occupied territory’ by international frameworks).

Gerrymandering in Jerusalem can be seen through tracing the continuous changes in boundaries of Municipal and Greater Jerusalem and allocations of land. Israeli communities enjoy expansion and economic development resources, including vast areas of confiscated Palestinian land that are marked as ‘security zones’ (‘environmental protection’ is used in a similar manner to first dispossess rightful owners, then later pass the land for expansion of the colonies). Meanwhile, Palestinians are limited even within their tightened municipal borders, where often large swathes of their municipal territories are classified as C,* placing them under the control of the Civil Administration (Coordination of Government Activities in the Territories, COGAT), which is an arm of the Israeli military apparatus. This translates with the banning of Palestinians from constructing homes or creating income generating projects (e.g. farming) on lands they own, as well as establishment of vital infrastructures such as those for waste water treatment, solar energy parks, etc.

Some of the earlier mentioned issues have resonance in the application of Gerrymandering elsewhere. However, in the settler colonial and apartheid condition of Jerusalem, the inferiorized population is also dispossessed of constitutional rights to fend off injustices. While Israelis enjoy citizen rights and protections throughout the area, Palestinians are stateless subjects under Israeli military law where some have access to Jerusalem’s center (by a revokable resident status, or by virtue of a limited permit), but the majority are unable to access. Since the annexation of the eastern part of the city in 1967, Palestinian neighborhoods have been a target of settler colonial Zionist organizations campaigns to evict rightful owners from their homes in collaboration with Israeli government apparatuses, and as the Israeli Committee against House Demolitions has documented, house demolitions are a continuously playing tragedy with more than 130,000 demolitions since 1947 (in the entire territory between the river and the sea, destruction due to armed aggression e.g. Gaza not counted in).