Conversing with Mobilizers in Nairobi and Berlin 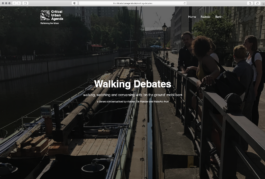 The Walking Debates took place within international conferences that were organized by the Institute for Advanced Sustainability Studies (IASS Potsdam) and brought together politicians, representatives of international development agencies, practitioners, and scientists. These Walking Debates were not about obtaining or transmitting information, although in their design they accomplished both. Rather, the focus was on taking a timeout from the classical conference program and leave the venue, walk around, converse and reflect on challenges and solutions with a small group of agents and engaged scholars. It was not about seeking consensus or objective perspectives, rather the opposite: to hear intersectional perspectives on socio-spatial reproduction and re-making, while being grounded by the initiatives and sites that we visited.

Walking Debate: Nairobi took place under the title “Geographies of resisting food insecurity by contemporary urban Africans”, on 30.11.2016, within the framework of the High-Level international event “The African Soil Seminar”. We visited the informal settlement of Mathare and the Karura Forest as contested sites and exchanged about food and nutrition insecurity, about ways in which urban poverty can and is being resisted, and on how to counter the productionist paradigm.

Walking Debate: Berlin took place under the title “Rethinking Urban Space: integrating – commoning – producing”, on 22.05.2017, within the framework of the High-Level international event “The Global Soil Seminar”. We visited the Roof Water-Farm and were joined by initiators of the Flussbad Berlin (see detour*0.D03), which are two reclaimed urban sites that serve research and showcase new ways of rethinking infrastructures, antispaces, and natural resources.